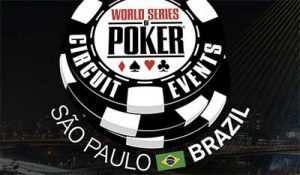 The World Series of Poker International Circuit is returning to Brazil for the second year in a row but the tournament has ditched its usual sponsor.

Instead of 888Poker, WSOP will be utilising PartyPoker for the Brazilian circuit from September 27 to October 4.

Despite WSOP partnering with 888Poker for several years and recently extending its sponsorship for the World Series of Poker Europe (WSOPE), PartyPoker will be the primary sponsor for the São Paulo event.

Additionally, it’s the first time PartyPoker will be dabbling in the Latin American market.

The 2017 event is offering Brazilian players a share of $1,000,000 guaranteed. Daily satellites are already running on the PartyPoker website, where players can qualify for a $1500 package for as little as $2.20.

PartyPoker also has 10 guaranteed packages up for grabs every Sunday, with each including a Main Event entry worth $1000, along with $500 in cash.

Players can also buy-in directly to the multi-day event for $1000.

Last year was the first time the WSOP International Circuit stopped over in Brazil. The tournament attracted around 12,000 entrants, with the $1,100 buy-in WSOP Brazil Main Event recording 1002 entrants.

The 2017 event is expected to attract an even larger crowd.

The 2017-18 WSOP International Circuit kicked off on August 2 in Argentina. It will run until August 8 at the Iguazu Casino.

It will then hit land-based casinos in Holland, and Italy before the Brazil festival. After the Brazilian stopover, it will travel to the Czech Republic, the Caribbean, France, Australia, Uruguay and Morocco.

“Our partner casinos have done a terrific job bringing the WSOP brand and experience to their properties,” WSOP Director, Gregory Chochon, said.

“The WSOP International Circuit is here to stay and we look forward to continually improving the experience and prize pools for the players.”

The International Circuit will see two winners per stop who will qualify for the WSOP Global Casino Championship – similarly to the WSOP US domestic circuit.

The Main Event winner and the Casino Champion will both score a place at the table at the season-ending freeroll, as well as a gold WSOP Circuit ring and prize money.