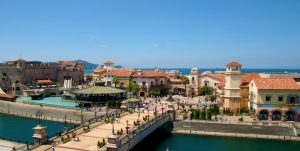 Wakayama is one of several Japanese cities being considered to host Japan’s first ever integrated casino resort, but the dream may be over before it even began as the mayor of Wakayama has announced the city may have to give up its plan.

Until now, Wakayama has been one of the most aggressive local governments in securing an integrated casino resort license after new laws were passed in Japan in late 2016 to allow casino gambling in the country for the first time. While the drafting of an implementation bill is still in progress, competition has been strong between cities and developers vying for a piece of the action.

The Wakayama Prefecture in the Kansai region of Honshu Island is already home to Wakayama Marina City, an artificial resort island developed over 20 years ago before the burst of Japan’s bubble economy. Developers responsible for the existing hotel and onsen on Marina City have envisioned an integrated resort as the perfect way to attract tourists to the island.

During a Wakayama City Council meeting last week, Mayor Masahiro Obana revealed the city may have to bow out of the plan if the proposed casino facilities allowed Japanese nationals to enter and participate in gambling.

The legalization of casino gambling has been met with staunch criticism by many Japanese nationals, who believe the introduction of integrated resorts will contribute to crime levels and gambling addiction in the country. Many are calling for the implementation bill to restrict nationals from entering the casinos, allowing the country to benefit from the tourism boost but without gambling related repercussions.

The Wakayama Bar Association opposed the IR plan on the grounds that introducing a casino to the area would lead to gambling addiction, corruption of youth and the possibility of organized crime.

Number of casino visits allowed in Japan may be restricted

As the Japanese government works on implementing the new integrated resort bill, media reports have revealed the Japanese Diet may restrict the number of casino visits allowed by Japanese nationals and foreigners.

According to the reports, Japanese government is planning on applying a weekly and monthly limit on the number of times visitors can enter and play the casinos. The number of visits has not yet been revealed.

In order to enforce these limitations, Japanese nationals will be required to present their My Number identification cards upon entry, while foreigners will need to show their passports or other identity documents.

The Integrated Resort Implementation Bill will also require casinos to restrict anyone from entering who is a self-declared problem gambler or has been identified by a family member as a problem gambler.

The bill isn’t expected to be finalized until late 2017, with the first integrated casino resort expected to open its doors in 2020.