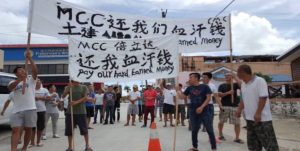 Chinese employees are protesting the opening of a casino in the US island territory of Saipan, amidst claims the Hong Kong gaming operator has refused to pay staff.

The protests add to the long list of controversies faced by owner Imperial Pacific International (IPI) which has faced multiple ordeals in the process of opening a casino on the Pacific Ocean island, which lies about four hours by plane from Shanghai.

The Imperial Pacific Casino held its soft opening on Thursday, with the casino marking phase one of the multi-million-dollar Imperial Pacific Resort Hotel Saipan project. Once completed, the integrated resort will offer a 14-story hotel with 340 suites and 15 deluxe villas, along with Michelin star restaurants. The casino offers 140,000 square feet of gaming space with over 70 table games and 190 electronic gaming machines.

The construction workers, who are mostly from the economically challenged regions of Northeast China, allege they have not received wages of up to $6,000 each, with several claiming they were injured on the job with no compensation. They are refusing to leave Saipan until their wages have been paid.

One worker who wished to remain anonymous said, “In addition to not paying us for months, the hourly wages we did receive were well below what we were promised. We are all very desperate because we all paid money from our own pockets to the brokers who brought us here.”

The allegations come after an undocumented Chinese construction worker fell off a scaffolding on the casino site in March 2017 and died, sparking an investigation by the Federal Bureau of Investigations (FBI) which led to one arrest.

The FBI reported the investigation and subsequent arrest related to a federal violation of the workplace visa system, following reports the company was purposely hiring illegal workers. According to the FBI, Saipan has a reputation for “widespread and systematic human trafficking within the labour sector” and the search uncovered a cabinet full of passports belonging to Chinese labourers without valid work credentials.

Imperial Pacific International later released a statement saying the investigation was not related to the IPI group or its employees.

The company has been sued multiple times since the 2015 opening of its temporary storefront casino, Best Sunshine Casino Live, which is located a few hundred meters away from the Imperial Pacific Resort site. A lawsuit was filed for wrongful termination against the provisional gaming facility and its subsidiaries by a former executive, Danny Ewing, who claimed the business was violating money laundering laws, immigration laws and intentional infliction of emotional distress.

In May this year, the US Department of Labour issued fines totalling $193,750 to three Saipan building contractors for safety violations, with the Occupational Health and Safety Administration finding the companies exposed workers to numerous workplace hazards around the Garapan casino construction site.

The unpaid Chinese workers are protesting outside of the casino site, holding signs that demand IPI “pay out hard earned money.” According to the workers, IPI employees tried to deter them from protesting.

The soft casino opening was met with positive response from local media sources, but with the track record so far, anything could happen before the official hotel opening. No opening date for the hotel has yet been disclosed.