Net Entertainment is one of the most prolific and successful online slots producers and their single most popular and well known online slot is Starburst. It’s hard to pinpoint the exact reason for Starburst’s universal populairty but when something is so widely loved, it is best not to ask questions and just go with it instead. When several online casinos offer free spins of a game as part of their sign-up bonus package for new customers, then you know NetEntertainment has done something right. But what makes Starburst tick? Why is it so widely loved and revered? We will attempt to break it down and understand the secret behind its popularity.

How to play Starburst 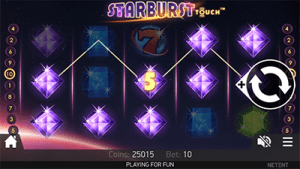 First and foremost, Starburst is a five reel, 10 pay-line online slot. The 10 pay line aspect is a refreshing twist on the norm of 20, 25 or 243 pay line slots. The thing that really enhances the gameplay though is the fact those 10 lines are paid both left to right and right to left. Playing 10 lines you can bet as little as $0.10 per spin or as much as $100 per spin, making Starburst a game suitable for all budget types.

The bright, different coloured symbols in Starburst make gameplay easy to follow because there is nothing worse than a pokie that has a range of symbols that are similar looking at a glance. The fun and colourful graphics are perfectly paired with a background reminiscent of space and futuristic background music and sound effects.

In descending order of value, the symbols are the BAR symbol, the lucky 7 symbol, the yellow diamond, the green hexagon, the red gem, the blue square gem and the purple square gem. These symbols appear stacked during game play which runs the risk of some massive payouts.

I like that the people down at NetEntertainment have added a little throw back to the classic slots or “one armed bandits” by adding the classic symbols of “Bar” and “7”. This reflection of the slots’ past paired with the futuristic background and sound effects create a fun contrast that isn’t lost on the player.

Spinning up any one or more Starburst wild symbols on reels two, three or four triggers the Starburst Wilds feature.

Having all three middle reels covered with wilds and spinning up a stacked “Bar” symbol on reels one and five gives you the jackpot of 50,000 coins.

All in all, Starburst is a great roll. It is simple, sure, but the best things in life are often the simplest.

Aside from that Starburst is a solid all round game that should keep punters from all walks of life entertained for hours on end.