The best online casinos carry hundreds of entertaining real money pokies titles, catering to all tastes with traditional three-reel slots, advanced video pokies loaded with special features, and progressive jackpot games which can make you a multi-millionaire overnight. Here are just a handful of the most popular Internet pokies games available at leading Australian casino sites like RoxyPalace.com, Casino-Mate.com and LeoVegas.com. 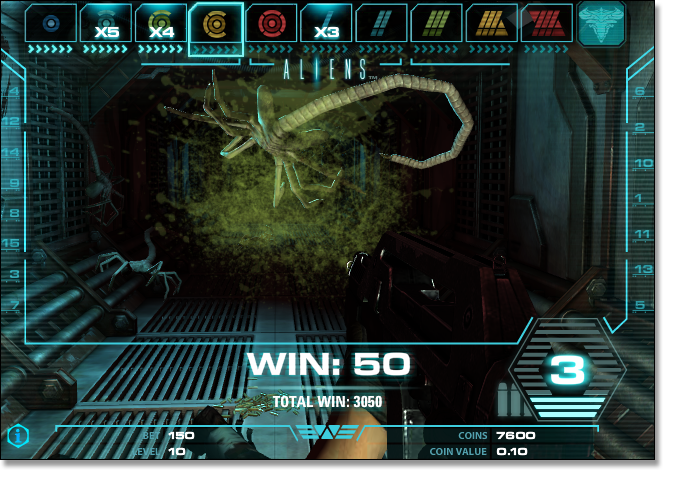 There are many, many licensed franchise pokies on the Web these days, but precious few come close to Net Entertainment’s superb Aliens pokies game. The moment you load it up, you know you are in for a treat; everything just looks and feels right. The star of the show is the three-level bonus setup. Fill all nine spaces on the Alien Activity Meter to progress from The Search base game to The Encounter, where you must keep collecting multipliers and ammo while seeing off alien scouts. Survive that, and you’re into The Hive – a four-tier bonus battle where the more damage you do to the Queen and her brood, the bigger your coin prize will be. You don’t have to be a fan of the 1986 James Cameron film to enjoy this one.

Steeped in the legend of King Arthur and his quest for the Holy Grail, the Avalon pokies series ranks among Microgaming’s most successful original franchises. The first edition – a 20-payline bonus slot with scatters, wilds and up to 12 free spins with 7x multipliers – is a fantastic little game which still gets heaps of traffic to this day, but the follow-up effort is pretty hard to beat. The Avalon II: Quest For The Grail slot is an absolute monster of a game, featuring 243 ways to win, expanding Lady of the Lake wilds, random Merlin multipliers and no less than eight interactive bonus rounds. The betting limits on Avalon 2 ($0.30 to $37.50) are flexible enough that you can reap big rewards and explore the Grail Bonus Trail without stretching your bankroll too far.

Net Entertainment progressive slots like Mega Fortune and Hall of Gods are legendary for their massive accumulating jackpots, the former having paid a world-record haul of more than EUR €17.8 million (AUD $24.7m in today’s money) on a mere €0.25 bet in January 2013. The new Cosmic Fortune jackpot slot offers all the big-money appeal of its older siblings, but with an ultra-modern gameplay style that will keep you entertained from go to woe. The three-stage bonus feature is a beauty, moving from re-triggerable Free Falls to a jackpot game which is a bit like pinball meets Space Invaders. The final bonus round offers five cash jackpots, three of which – the Minor, Major and Mega progressives – keep going up and up and up until they are won.

Another hugely popular franchise collection from Microgaming, these Batman pokies capture all the grit and suspense of Christopher Nolan’s latest two instalments with stunning HD graphics and real live-action clips from the movies. The Dark Knight Rises features expanding wilds, randomly scrambled symbols and Batman vs. Bane fight sequences which can increase the free spins and multiplier accumulators whenever they appear. Even more famous is the original Dark Knight online slot, which boasts one of the richest progressive jackpot systems on the Web. (At the time of writing, the Dark Knight Mega Jackpot stands at over AUD $6.2 million.) 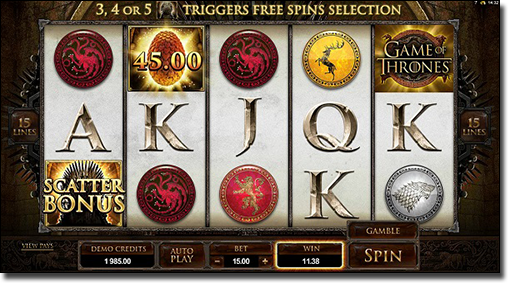 It was only a matter of time before the hit HBO fantasy series was adapted for online pokies games, and Microgaming obliged in late 2014 with not one, but two scintillating Game of Thrones pokies titles: a 243 ways version, and a 15-line video slot for the purists. Both releases feature incredible production values (including that iconic opening melody from the TV show) and a maximum bet limit of $30, which is quite generous compared to most licensed pokies games. Unlock the Iron Throne scatter bonus to choose between four of the most powerful families in the Seven Kingdoms of Westeros – House Lannister, House Baratheon, House Stark and House Targaryen – with each offering a different number of free spins with fixed multipliers and stacked sigil symbols.

NetEnt’s South Park online slots are as rowdy and raunchy as the long-running Comedy Central series upon which they are based. The first title pays homage to the cartoon show’s early years, with wild mini-features starring classic characters like Mr. Hanky the Christmas Poo and Canadian methane maestros Terrance and Phillip. The newer South Park: Reel Chaos slot follows Cartman, Kenny, Kyle and Stan as they seek to thwart the Evil Minions of Professor Chaos and General Disarray, with a plethora of wilds, multipliers and bonus spins to be had along the way. Probably the coolest thing about both titles is that they each allow real money bets of $100+ AUD, making them great options for VIP gamblers who want a hi-stakes slot game that doesn’t skimp on special features.

BetSoft slots are renowned for their innovative visual layouts, but this sunshine-and-lollipops release really takes the cake (so to speak). With a quirky 5 x 5 reel setup, the SugarPop online pokie will instantly appeal to anyone who enjoys social media games like Matching With Friends and Candy Crush Saga. The re-spins feature can produce several consecutive wins on a single spin, while a unique all-ways payout system allows you to connect matching candy symbols in any direction. Keep winning to level up and unlock new worlds with extra bonus features, including a dozen different Special Candy wild symbols. A maximum bet of $250 per spin makes the SugarPop slot an extra-tasty treat for high-stakes pokies players.

Heavily influenced by Norse mythology, the Thunderstruck pokies are among the most popular games ever to emerge from the fabled Microgaming production line. The original Thunderstruck slot is a near-perfect representation of the classic Australian pokie machine, with five reels, nine paylines, free spins, wild multipliers and a highly accessible $0.50 to $22.50 bet limit. The sequel, Thunderstruck II, is one of MG’s premier 243-ways slot games, adding improved graphics, the randomly activated Wildstorm feature, and a four-stage bonus round which unlocks extra free spins, multipliers and special symbols the more times you retrigger it.