Online gambling in Michigan could get a second chance at life after a new bill has been introduced to appease both commercial and tribal gaming interests in the state. 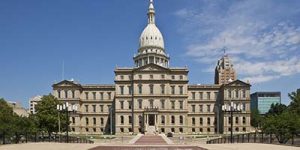 Senate Bill 203 aims to create the Lawful Internet Gaming Act and provide the state of Michigan a regulated iGaming industry, tasking the Michigan Gaming Control Board to issue licenses for both commercial and tribal online casinos and establish new rules and regulations within one year of the bill’s enactment.

Michigan state casinos are the only businesses allowed to apply for an online gambling license which lasts five-years and costs $200,000 for the first year and $100,000 for the remaining term, and there is no cap on the number of licenses that can be issued by the state – or restrictions on establishing interstate and inter-jurisdictional compacts.

As in other states, all players must be at least 21 years old and located within Michigan borders. Curiously, online poker must be provided by operators.

It also will impose a tax on the conduct of licensed internet gaming sites – a paltry 10% of gross gaming revenue expected from operators compared to the higher rates in other American states with online gambling regulation such as New Jersey.

The problem is S 203 has been dead in the water since March 1, when it was first passed by Senate Majority Floor Leader Mike Kowall and the Senate Regulatory Reform Committee by a vote of 7-1. Most of the dozen Native American tribes in the state opposed the bill and local casinos operators like Greektown or MGM Grand Detroit remained silent on the matter, with only Amaya lending their public support for the legislation.

This is despite the relatively low licensing costs and tax rates proposed, at least compared to states like New York which are asking for $10 million up-front for operators to run online poker sites.

Instead of the Michigan Gaming Control Board regulating tribal online casinos as originally proposed and essentially forcing the tribes to be considered as commercial Internet gambling operators, tribes will now be considered sovereign governments with the ability to self-regulate following amendments of their existing compacts with the state – though they would have to adhere to age verification, responsible gaming practices and other standards imposed on state-regulated online casino operators.

Other known alterations include a 12-month moratorium imposed on Michigan’s commercial casinos who may wish to open iGaming sites, and a 90-day response time to tribal applications for online casinos.

Author’s comments: Whether the new changes are enough to get the ball rolling fast or we’re in for another few more months of back-and-forth pain is all in the hands of the Michigan House – though they could in the meantime look into New Jersey’s massive economic success since regulating iGaming in 2013 for inspiration to just make this legislation a reality already.