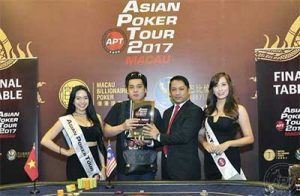 Macau is expanding its poker offerings thanks to a deal between the Asian Poker Tour (APT), Macau Billionaire Poker and Babylon Casino.

The exclusive five-year deal will see at least two international poker events held at the land-based casino in Macau, which will help APT find a permanent home in the autonomous region where land-based gambling is legal.

The first event to take place under the agreement is he APT Finale Championships Macau 2017 which will take place at the Babylon Casino from November 29 to December 9 – provided APT gets the appropriate regulatory approvals.

The APT has grown rapidly with more than 60 international poker events already held around the world since its launch in 2008.

Eight of the events have been held in Macau and APT CEO, Jeff Mann, believes poker in the region has huge potential.

“Put bluntly, for our next stage of growth and expansion, APT now needs a permanent base in Macau,” he said.

“APT needs to be a very active participant in what is the gaming hub of the world.

“We are delighted with this new partnership with MBP and our joint vision of what is possible for the Macau poker scene moving forward.”

“For too long Macau has been restricted in terms of the variety of poker tournaments on offer which we believe has restricted the growth of poker not only in Macau but also in Asia,” the company said.

“Given the incredible growth and following for poker from Mainland players, more professional tournaments are needed.

“The APT is an established and well-respected brand in Asia and viewed by many as the best poker tournament organiser in the region.”

The announcement comes only weeks after the World Series of Poker (WSOP) announced it would be sponsoring mainland China poker events.

After his win at the $1100 APT Main Event Championship in Cambodia, Aik Chuan took out the APT Philippines 2017 Main Event too.

He has become the first ever APT main event champion to win back-to-back events after he outlasted the field last Tuesday at the Winford Hotel and Casino in Manila.

Chaun won his first APT Championship ring at the Star Vegas Resort & Club in Poipet after he beat 50 players on July 7.

The win took place at the same time the casino opened up its new poker room, branded the Poker King Club.

The next leg of the APT will take place from August 12 to 20 when APT Korea Incheon 2017 hits the Paradise City Casino in Northeast Asia. Among the tournaments is the Main Event, as well as a Super Deep Stack, Deep Stack Turbos and Head Hunter.