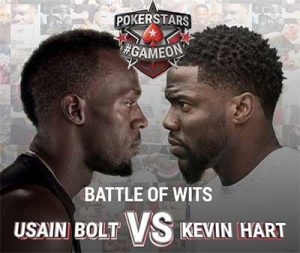 Two of the world’s biggest superstars are making poker fast and fun in a new PokerStars challenge.

Usain Bolt, who is considered to be the fastest man in the world, is going head-to-head with comedian Kevin Hart in a new PokerStars campaign.

While the pair will use social media to put each other off their game under the #GameOn hashtag during the coming months, it will all come down to the end result at the poker table.

In January 2018 the two celebrities will be face-to-face in one of the most exciting poker events – the PokerStars Championship Bahamas.

But the first social media battle will take place on July 5, with fans set to determine the winner. You can weigh in by following the hashtag, and showing your support by posting a tweet with #TeamBolt or #TeamHart.

Director of Poker Marketing at PokerStars, Vadim Soloveychik, explained the event will promote the skills required in poker, including the need to read people, bluff and make calculated moves.

“Usain and Kevin represent two of the most popular personalities on social media, each with unique characteristics and loyal worldwide fans,” he said.

“It’s the fast vs the funny. The gloves are off, and it’s about to go down. There can be only one winner, and it will take a smart, shrewd, maverick mind to win this battle.”

PokerStars have once again taken advantage of the marketing positives social media provides in its latest campaign, which was produced by the London-based creative agency, Gravity Road.

“#GameOn builds on that social behaviour, with an idea designed to work organically,” he said.

“Many brands treat social media as a collection of consumers and not audiences.

“That understanding of what people want to spend time with is hard baked into the #GameOn idea.

“Usain and Kevin are natural competitors and are already getting worked up about this. So who knows how it will end.”

Usain has already called out Kevin on twitter when he first signed on with PokerStars, warning “the little man” he was coming for him.

I’m all in @PokerStars. Watch your back @KevinHart4real 😉 pic.twitter.com/ncFf0Rnmx0

The campaign put on by PokerStars parent company, Amaya Inc., also takes advantage of the long-standing rivalry between the two celebrities.

Four years ago the pair raced each other on the basketball court at an NBA All-Star Celebrity Game where Kevin surprisingly won – although Usain did not appear to be trying his best.

This is not the first time PokerStars used celebrities to promote the already popular game of poker.

Notable celebrities who have promoted the online poker site include football sensations Neymar Jr, Ronaldo Luis Nazario and Cristiano Ronaldo, as well as basketball star Dwyane Wade. The campaign, which had the hashtag #raiseit, saw the sporting superstars out do each other on social media and then at the poker table.

It is no wonder PokerStars is using a similar campaign, as its 2016 annual report revealed the #raiseit marketing campaign with Cristiano Ronaldo, Dwayne Wade and Neymar Jr. received over 158 million social media views.