BetSoft takes pride in being the self-proclaimed innovator and leader of true cinematic 3D gaming. They are one of the most industrious online games producers on the market at the moment, regularly releasing new and exciting slots for our pleasure. It is this constant turn-over of quality 3D products that distinguishes BetSoft from their competition, who almost seem lazy by comparison.

BetSoft doesn’t just rest their laurels on their cinematic 3D slots range (known as the Slots3 range), they also have a range of table game products as well as a growing range of mobile slots which BetSoft refers to as their ToGo range.

BetSoft’s Slots3 is their signature range of cinematic 3D slots. The great thing about BetSoft’s Slots3 range is each game has a distinct theme or back story and often even features a main character. Games produced by Betsoft generally have a little bit more to them, for instance Mr Vegas features side games of roulette and blackjack.

While the games are still distinctly pokies, it is this variance and giving the player choice that has made Betsoft an extremely popular choice for players. This article will run you through some of the best pokies produced by this software company. 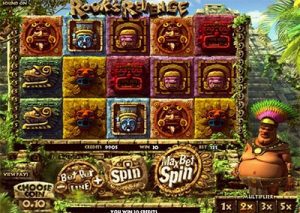 This is actually a sequel to an earlier BetSoft release called Aztec Treasure. Rook’s Revenge is a unique 25 payline slot with a minimum bet of $0.50 per spin and a max of $125.

The main game operates under exploding symbols/rolling reels style, which gives the game a very unique feel. Whenever you get any three or more winning symbols on an active line, they explode for more symbols to rain down in their stead, giving the potential for multiple wins from the one spin. Each subsequent win from the initial exploding symbols raises the multiplier bonus at the bottom right hand of the playing screen.

During paid plays the multiplier bar is x1, x2, x3, x5. However, any three or more Golden Mask symbols symbols the free spins and increases the multiplier for the exploding symbols to x3, x6, x9 and x12. These multipliers give the potential for some massive wins. In fact, you can win as much as 2,330,000 credits on Rook’s Revenge. 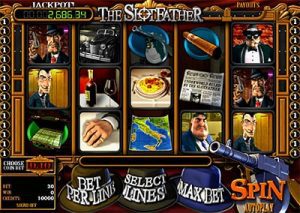 Slotfather is a 30 payline pokie with a minimum bet of $0.60 and a max bet of $150. This is a progressive jackpot slot, with the jackpot being triggered only when you are playing the maximum bet and spin five Slotfather symbols on an active payline.

The Multiplier Mob Free Spins are triggered when the Old Gangster symbol appears next to the Tommy Gun symbol on payline one, two or three. This feature will award you from three to 10 free spins with up to x3 multiplier and a credit bonus of 150. 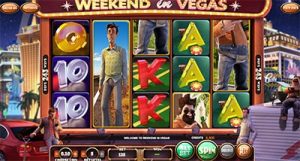 This 243 ways slot follows three friends on their trip to Vegas: Loony Larry, Balanced Ben and Cautious Chris. Weekend in Vegas has a top pay-out of 1,210,500 credits. This game has a main feature and a bonus round. The free games feature is triggered by any three, four or five scattered police car symbols. You can win up to 20 free spins from this feature. At the end of your free games you get a spin of the Money Wheel.

Three or more of the same character covering an entire reel triggers the Bonus Round. During the Bonus Round the character you spun up – Loony Larry, Balanced Ben or Cautious Chris – finds themselves on a strip with several casinos. You get to choose which casino the gang goes in to. From there the betting type of each character comes into play. Loony Larry bets big and either losses straight away or wins BIG, Balanced Ben plays sensibly with average returns while Cautious Chris is frugal with his bets but always wins. 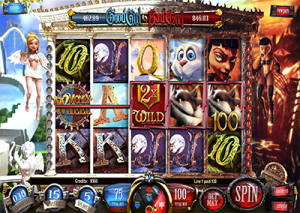 This is one of BetSoft’s most unique games in that you get to decide on the gaming experience yourself. You can choose to play good (left to right), bad (right to left) or both for double your bet. Good Girl, Bad Girl is a 15 payline slot with a minimum bet of $0.30 and a max bet of $150.

As well as that there is also the Click Me Feature which can be triggered when the halo wild symbol and pitchfork wild symbol land next to each other. From there, depending on which game choice you have made, you get to choose from four different boxes across a possible four rounds to reveal credit prizes. Mr. Vegas is a 30 payline pokie with a minimum bet of $0.60 and a max bet of $150. It also has a progressive jackpot and so many feature and bonus games it is dizzying.

To win the progressive jackpot, first you must be playing the max bet, then you have to spin five slabs, which appear in the top right hand corner of a symbol, to trigger the Money Wheel Feature. You can also win credit prizes, bonus rounds or free games from the Money Wheel.

Any three or more scattered pokie machine symbols gives you three free spins on an old style “one armed bandit” type slot where you can spin up credit wins.

If you manage to spin up the Craps dice and Mr Vegas next to each other on pay lines one, two or three. Mr Vegas will roll the dice and whatever total is rolled is how many free spins you get. If by chance the dice show a double then your free spins will be multiplied by two.

You can also trigger the Mr Vegas Roulette Bonus Round by spinning up Mr Vegas anywhere on reels one, three and five. This Bonus takes you to a roulette table and lets you choose numbers for Mr Vegas to bet on roulette.

For a large selection of BetSoft pokies, head to Slots Million where you can search for games by software developer. New players can claim up to $100 in welcome bonuses and get 100 free spins to use on selected slot games.
Share On Facebook Share On Twitter