Online pokies have incredible bonus features players can trigger, but since there’s thousands of titles at the secure sites we recommend, it can be hard to locate the best. To save you from wasting your real money bets on anything less than the best, we have found the 10 top pokies with the best bonus features.

Created by the guys who branched off from NetEnt to create ThunderKick, Esqueleto Explosivo is the best title for those after Cascading reels – predominantly due to the 32x multiplier on offer.

Every win you score will see the winning combination of skulls explode and new symbols will fall into their place – hence the coined term cascading reels – to give you another chance at a win. As you continue to win on consecutive spins, multipliers will be awarded from 2x right up to 32x.

Wilds are also added to the reels on consecutive Re-Spins, with one on the middle reel after the first win, three on the middle three reels after the second win, and all reels scoring Wilds on the fourth win.

3. Gamble Feature: It Came From Venus

The guys at BetSoft are incredibly nifty when it comes to designing their pokies. The themes are original and the graphics are designed to immerse you into the game. Another quirky idea the developers have come up with is to integrate the Gamble feature – where you can double or quadruple your winnings – into the theme. The best one we’ve seen so far is on It Came From Venus.

Known as ‘Double up’, after a win players can hit this button and be taken to a second screen where you choose whether the plant will catch or miss the apple Skeeter, the farmer, throws at it. There’s a progressive jackpot attached too, though we wouldn’t recommend gambling it. 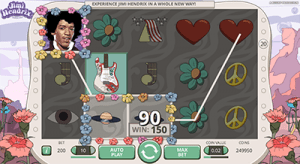 Players can trigger these by collecting their corresponding symbols with six free spins awarded in the Crosstown Traffic Free spins and up to 12 free spins awarded in the other two Free Spins features – a total of 30 each with their own unique Wild added. This is the most amount of different Free Spins features we’ve seen on a pokie – and the best part is you can spin along to the tracks of the iconic rock legend all thanks to Net Entertainment.

This is an incredibly popular title by Microgaming due to the Multi-Level Bonus attached. Known as The Great Hall of Spins, there are four levels you can activate as you play.

Spiñata Grande by NetEnt is already a unique video pokie with the 5×4 format instead of the usual 5×3. But the Colossal Symbols Feature is what really makes this title stand out.

This feature sees a grid of 2×2 or 3×3 symbols covering the reels, which sees extra ways to win as symbols overlay one another. What’s more is the grid even turns into a mini-slot inside the pokie when you trigger the Free Spins feature.

Flowers is a unique title with a simple theme. Another creation by NetEnt, this online poker machine features Double symbols where two symbols are connected. These include the Scatters and therefore you can get up to eight Scatter symbols on the pokie.

The usual Free Spins function is in play – the more Scatters you spin the more free spins you earn, as follows;

Spinning eight Scatters does sound like a lot, but with the Double symbols it’s a lot easier than you think.

For those who are a fan of Gladiators, you will love this pokie especially for its bonus feature. When you spin at least three Scatter symbols you will trigger the Bonus Round where you get to pick whether you want to be the Hero or the Villain, which makes this game so much more interactive. As each blow is taken a payout is received and you can win a fairly big coin payout here.

Pick Me bonuses are quite similar – you trigger the feature and you pick symbols to reveal a cash prize. But what makes this title so special is the graphics and the animations. Players trigger the bonus round by scoring two male dancers on reels 1 and 3 and one female dancer on reel 2 and here you pick a ‘suave man’ to battle it out in a dance off to win a big payout.

We know this Microgaming pokie is a Christmas themed title, but you can play it all year round and it allows players to choose the function of the Wild during the Free Spins feature.

You will find these pokies and hundreds more at our recommended online casinos, each accepting AUD currency and offering a handy search bar to locate one of the aforementioned titles quickly. Slots Million get our vote for the number one pokies site, offering 1600+ slot games available for free play in practice mode or for real money bets.
Share On Facebook Share On Twitter