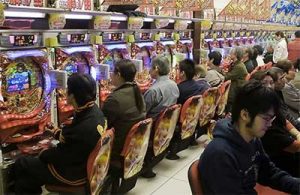 The Japanese pachinko industry is suffering as a result of the newly legalised casino industry.

As lawmakers discuss the ins and outs of casino regulation, Japan’s pachinko market leader, Dynam Japan Holdings, has revealed a steep revenue decline in the second quarter of 2017.

In a media release, the company blames the three-month slump on a “harsh environment as the number of customers especially in high playing cost halls declines”.

The pachinko industry has been heavily scrutinised in recent months due to the magnifying glass on gambling regulation.

The government passed a law last year that allows Integrated Resorts (IR) to operate in the country, provided the appropriate legislation is drawn up.

Pachinko has long been exempt from the nationwide gambling ban since the machines are considered arcade games – players win prizes, not cash.

But there are ways to exchange the prizes for money which in turn makes pachinkos incredibly similar to slots.

The 4.7 percent decline is predominately due to a drop in high limit pachinko players which dropped by 7.9 percent over the 12 months. Meanwhile, low limit playing halls recorded a 0.6 percent increase.

“We attract customers by creating easily accessible and secured environments through an increase in low playing cost halls and a staged reduction of the percentage of gambling game machines being installed,” the company said in the media release.

The company added that hall creation has been a key priority and “to improve operations, the group incorporated company-wide sharing of successful examples of gaming environment improvements and sales measures that each hall is engaged in.”

The pachinko industry could take an even harder hit if the Japanese government decides to go ahead with the decision to slash pachinko payouts by 50 percent.

Reports have recently emerged that the National Police Agency (NPA) want to reduce the prize value which can be won within four hours’ play from ¥100,000 to ¥50,000.

According to the Japan Times, the NPA is drafting new regulations for entertainment companies, including pachinko businesses. The draft reportedly proposes a reduction of the number of pachinko balls which can be won as well the maximum balls a jackpot can reach from 2400 to 1500.

The pachinko industry has escaped strict regulation for years but due to land-based casinos, it appears the free rein is over.